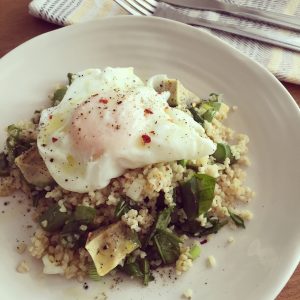 This morning I woke with a real craving for eggs and carbs!!

Normally this would mean egg on toast, I normally only eat bread baked by Julie Brealy as she makes me the most amazing sourdough rye bread which my gut can tolerate much better than commercial breads.   But we have just returned from our andalusian retreat and there has been no baking so far at The Body Retreat.  So no bread for me.

So my crab craving was satisfied this morning by using bulgar wheat. Buglar wheat or cracked wheat is a good source of dietary fibre and plant protein.  While bulgur wheat is definitely a step up from refined carbohydrates it’s still best to have in moderation.

You could substitute Quinoa for the bulgar wheat here and have a great dish if you want to go gluten free.

Due to popular demand we have been able to add an

Weight loss is almost always depicted as something

Retreat@Home gives you all the resources you need