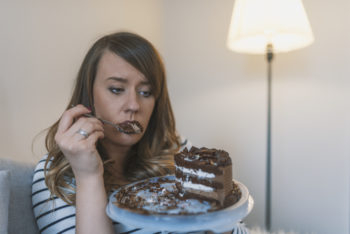 What is Emotional Eating?

…and what can I do about it?

Technically speaking, emotional eating is caused by stress or other uncomfortable emotions, but it’s also something people often perform out of habit.

The Power of Habit

Charles Duhigg’s book, The Power of Habit, talks about how habits can essentially be broken down into three parts: Cues, routines, and rewards.

According to Duhigg, almost all cues fall into one of five categories: Location, time, others, emotional state, or a previous action. The cue is what gives power to the habit as its sets it up. For example if you always want a biscuit with a cuppa.

For many women who engage in emotional eating recognising the cue is key. Of course, in order to do this you need to first be aware of the cue.

Negative emotions like stress, anger or hurt are often triggers for those who emotionally eat, but other factors (such as boredom or the dreaded mid-afternoon energy slump) might contribute as well.

Avoiding negative feelings altogether is impossible of course, but being aware of emotions as they arise may prevent you from engaging in the next two parts of Duhigg’s model — the routine (taking biscuits from the kitchen cupboard) and the reward (eating the biscuits).

In addition to identifying and/or avoiding the cue, Duhigg recommends changing the reward altogether. So, for instance, if instead of rewarding yourself with food after a bad day, you met up with a friend or took a bath, you would start changing the overall habit.

So identifying the cue is the start but be proactive and change the reward as well. In this way you really begin to build up a new pattern and the old habit starts to lose its hold.

The truth is that eating only temporarily distracts you from the problem or negative unhelpful feelings and then it leaves you with even more problems.

In the long term it all comes down to building alternative coping mechanisms and helpful responses to those negative or unhelpful thoughts that led to eating in the first place.

In other words, for many women who experience emotional eating, ruminating on negative thoughts may be more of a cue than the actual negative emotion… I think therefore I Eat!

So when you find yourself getting caught in a downward spiral of thoughts, don’t allow yourself to get sucked in too deeply. Instead choose to do something different. Get up and get outside for a quick 10 minute walk, pick up the phone and speak to a good friend, watch a laugh out loud comedy on TV, Do something that will lift your thoughts…even for a short period… as this helps to break the cycle of thoughts becoming eating cues.

Are you an emotional eater? Do you recognise your cues?

Due to popular demand we have been able to add an

Weight loss is almost always depicted as something

Retreat@Home gives you all the resources you need